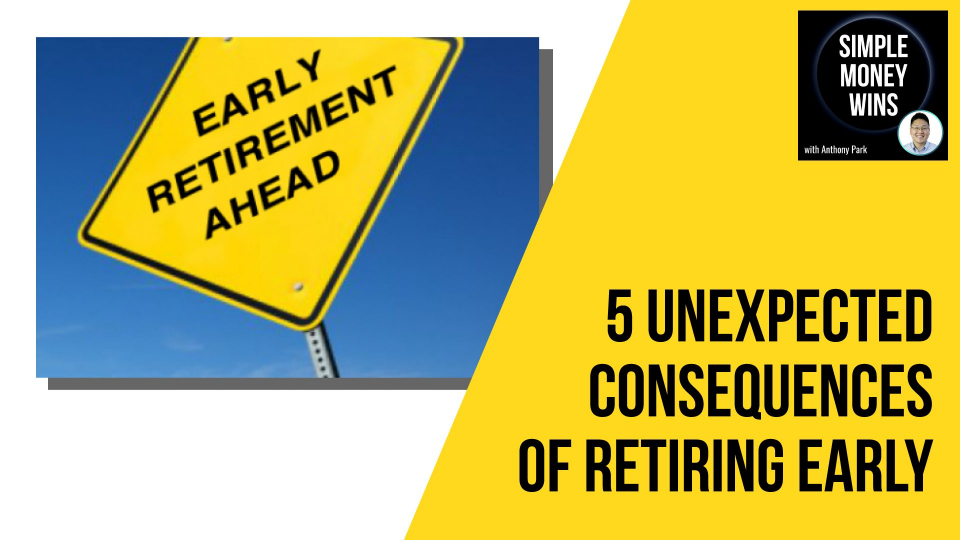 We’ve previously talked about the “F.I.R.E.” movement (Financial Independence and Retire Early). Most people assume that early retirement is a universally good thing. But what are some of the unexpected drawbacks of leaving the workforce early?

1. Not as Happy as You Expected

Generally, retirement makes you happy, but the increase in happiness was already priced in. It’s not like an instant happiness from winning the lottery. Retiring early is a process that you’ve been building up. Perhaps it’s better to say that the process toward early retirement may cause a gradual increase in happiness. People have said that the initial happiness of retiring early tends to fade in three to six months. As humans, we adapt to our circumstances quickly. Your way of living eventually becomes your normal.

Many people don’t realize how much of their identity is connected to their job and only after you leave your job do you truly realize how wound up you were in your profession. This identity crisis may last as little as three months or even up to a few years.

When people ask what you do for a living and you tell them you don’t do anything, it could pull at your sense of self-worth. It’s hard to tell people that you are not working when you used to do something. You may feel like you now have a void that needs to be filled.

This affects more of corporate America. When you work for a company, regardless of your actual salary, you may have a fancy executive title. You make decisions that have potentially million-dollar impacts. You have people reporting to you, depending on you, and seeking your permission. It is extremely hard to shift from having all of that power and influence to having none of it. Going from a job like that to fishing every day may sound heavenly, but people report that it is hard to deal with the loss of that sense of importance. When people prepare for retirement, they often think of the financial aspect, but It is important to plan for how it will impact you mentally and emotionally, too.

Most of us have been working for money since we started working. Once you achieve financial independence, what now? You don’t want to be idle, but you’re not striving for the highest paying position. Losing your main source of motivation can be disorienting, but it is something you have to learn to deal with.

When someone retires, their motivation isn’t for money anymore. They need to find happiness and fulfillment in other ways. The most public example of this is Bill Gates. He made his money in Microsoft, but he’s not working on Windows anymore. He’s trying to cure malaria and solve nuclear power. Not everyone will retire and become a philanthropist, but retirement opens the opportunity to do something you love. Maybe you had a demanding work schedule that kept you from volunteering. In retirement, you now have the time to pursue those desires.

5. Living within a budget

This does not apply to everyone, but many retirees have to watch what they spend. Maybe you start declining dinner invites, forgoing expensive travel, downsizing belongings, or sell your home. For many, living on a budget is an easy decision when deciding if they would rather be back in the rat race, or forgo some things and truly be retired.

I’ve read essays from folks who have been through this. I think the F.I.R.E movement is not just about retiring early but making sure you’re set up to have resources. Retirement means changing your budget for the stage you’re in. For some, it will be a tougher adjustment than for others.

You can learn more in my book, “How to Invest for Retirement”

E219 What Happens to Your Stuff Upon Death?
Scroll to top